Well, it turns out I don’t have a fungal disease from getting a pedicure…instead I have a Pyogenic Granuloma. Click on that link if you want to learn more.

I pretty much thought I would go to the doctor and she would give me a pill to make it go away. When I went to see her, she dug at it for a while, then told me it was too deep and that I had to go to the Wound Care Center. YIKES!


I decided to ignore the whole problem until after I got home from South Carolina so that I would be able to go in the pool and the ocean (I’m so glad I made that decision…the water was incredible!) So anyway, after a few hectic phone calls, I was able to get a last minute appointment yesterday at 4:30.
The doctor I saw at the Wound Care Center is named Tad Sprunger. He specializes in Podiatry and foot wounds. He is young, smart, and he speaks English! He took one look at my toe and said, “Oh, that’s a Pyogenic Granuloma.” I was so happy to finally have a name for this persistent foot sore. I’ve had it for over 2 months now!
He basically told me that I have to have surgery as soon as possible. They are going to cut a football shaped piece of skin around and including the wound, dig down to the bottom which could be all the way to the tendon, snip this thing out, cauterize it, and sew it up. All of this will be done while I’m totally knocked out with general anesthesia! This is so much more than I expected, but I’m so relieved to get rid of it!
I have to be at the hospital at 10am tomorrow for the surgery that begins at 11:30. My grandma is going to pick me up and drop me off at home since I’m not allowed to drive after being knocked out. I can’t eat or drink anything (even water!) after midnight tonight, I have to wear comfy pants and no eye makeup! If I was stranded on a deserted island and could take 2 things with me, they would be a Bible and mascara…and I can’t wear it tomorrow! After the surgery, I will have to keep it out of water (which means showering with a bag on my foot) and I’ll have to wear one of those funny looking boot things for 2 weeks!
Here are a few pictures (BEWARE — GRAPHIC PHOTOS BELOW!): 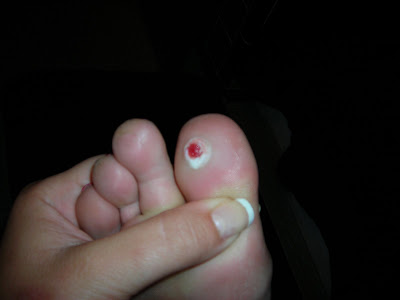 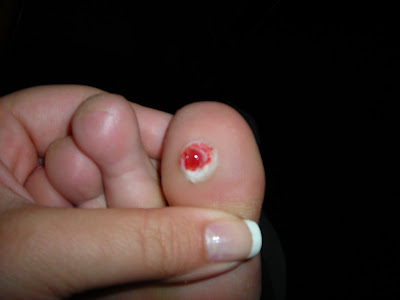 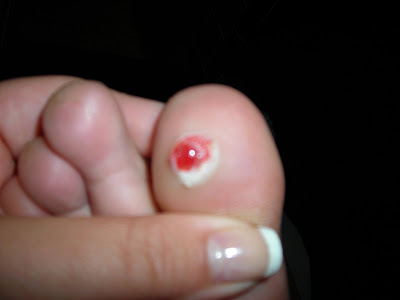