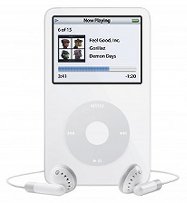 I got an IPOD!!!!! The funniest thing is that I didn’t even know I really wanted an iPod. I have been making comments about them for a while now but I didn’t really think I would get one. When Andy and I first went to New York a couple of years ago I immediately noticed that everyone had an iPod! On the subway, walking along the street, in Central Park…it was insane! That’s when the fascination began. Since then a few friends of mine have gotten them and I’ve been intrigued. Now that I have one I’ve been wondering where it has been my whole life! I immediately downloaded most of the songs I like from my cd collection. I’m notorious for liking one or two songs from a cd and “wasting” the rest. Now I can have those one or two songs on my iPod and I can forget the big old cd! Suddenly cds look gigantic to me! I also learned from Rich Taylor last Sunday (check out the church he’s helping plant in Arizona) that I can download sermons by Mark Driscoll (author of Radical Reformission and an incredible speaker) onto my iPod! I’ve since downloaded almost 30 sermons! Check out www.marshillchurch.org if you want to hear his stuff. His series on Habakkuk was really cool since I have a hard time getting into the Old Testament on my own. Especially those obscure books whose pages are still stuck together in most people’s Bibles! It was an unexpected yet awesome gift. Thanks Andy!!