Top
Ok, so here’s the cake I made for my sister-in-law’s baby shower on Saturday. 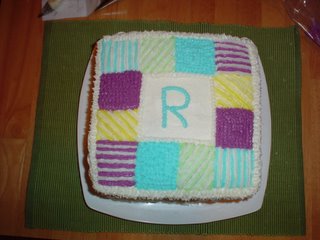 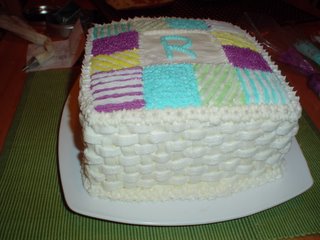 It looks fine to me now, but at 3:30am on the day of the shower, I was hysterical. The problem was the color scheme. I’ve been so used to making dark-colored icing (for Christmas and the Super Bowl) that I generously scooped the food coloring paste into my icing bowls. My blue was too blue and my purple was too purple. I was going for sky and lavender and ended up with circus blue and eggplant. The green and yellow were fine, but that didn’t console me at the time. In addition to the color trauma, I decided to “eyeball” the quilt square pattern rather than meticulously measure it out, and I ended up with uneven blocks of colored squares. To make a long, ridiculous story short, I woke Andy up in the middle of the night having a nervous breakdown about the cake. Dear soul that he is, he got out of bed to have a look at the “ill-colored” cake. He did his best to console me and then prayed with me so I could calm down and get some sleep. I still can’t believe I can be such a neurotic freak about such insignificant things. The last baby shower cake I made sent me into a panic because I thought the cake layers got too dried out from being frozen. At least I didn’t make that same mistake this time. This cake was completely moist. Fortunately, I seem to be learning a valuable lesson each time. I’m hoping my next cake decorating adventures lead to total satisfaction rather than hysteria!